We went to La Rioja only as a necessary stop on the road from Villa Union to Cafayate. However, we had heard some interesting things about the town, and it seemed like a good opportunity to enjoy the luxuries of urban living after a week or so on the road and in small towns, but it ended up being one of the strangest and most frustrating places we went to.

One of the things we had heard about La Rioja that interested us was that Jesus Christ was the mayor. It turns out that he is just the ‘symbolic’ mayor, but the story is still interesting. Apparently in 1593, early in Spanish colonisation of the area, the local indigenous people, the Diaguita, reached an impasse with the colonising forces. The priest, being a good negotiator, and in the interest of ‘saving’ native souls, was the intermediary between them. I have not been able to find exact details about what they disagreed about – perhaps it was the Spanish were stealing their land and forcing them into slavery. The official history is still that the Diaguita ‘accepted’ peace (they also apparently ‘volunteered’ to build one of the churches in the town). I’m cynical about these things. Anyway, a condition that the Diaguita put on peace was that they got to choose the mayor. They chose Jesus. I can just imagine the poor priest when the Diaguita came to him and said “You know that Jesus guy you are always talking about? Yeah, him. That’s who we want to be the mayor”. They now have a small statue of Jesus as a child called ‘El Nino Alcalde”, which lives in the Convento de San Francisco. They bring it out for a festival on New Year’s Eve, which sounds quite interesting; unfortunately we were not there at that time and did not manage to see the statue in the short time we were in La Rioja.

Arriving in the evening, we could have caught a bus north that night, but we were keen for a good sleep and a good meal, so we went to find a hostel, which entailed spending the entire following day there as well, because in the great South American tradition, bus services from rival companies going to the same destination all tend to leave at the same time. We found an ugly but affordable room in the Residencial Anita, a small place run by a friendly but reserved Doña. A pay-by-the-kilo restaurant had a the best vegetarian food we had eaten for quite a while.

In the morning, we enquired with the Doña about keeping the room for the day at a reduced rate, given that we had until 11pm that night before the bus. She would only offer us a slightly reduced rate over staying the night, so we elected to check out then and spend the day around the town. Unfortunately, we had not realised that La Rioja was apparently famed for its long and complete siestas. This may or may not have been influenced by the fact that at that time the swine fu epidemic was at its height and Argentina was very badly affected. After emerging from a few days in the wilderness of Talampaya and Villa Union, we discovered when we got to the bigger city that many people were wearing face masks and the media was full of swine flu anxiety. In most other places we had been to that had long siestas, we amused ourselves on days without much to do by spending time in internet cafes; but due to the swine flu outbreak, the regional government in La Rioja had declared that internet cafes were to be closed at all times. Amusingly, many internet cafes (known as locutorios) also have public telephone booths, which were allowed to be used, however the computers were off-limits. All of this resulted in us having absolutely nothing to do from around 10am until about 4pm.

After an obligatory but unsuccessful attempt at a couple of internet cafes, we eventually resorted to sitting at restuarants and in the plaza all day. Sitting at a table outside the largest and most prestigious hotel in the city, overlooking the plaza, we ordered papa fritas (potato chips) and beer. The beer came out first, and the waiter asked “with foam, or without?”. We thought about this for a minute. Normally in Australia, beer comes with just a litle bit of head, so you know it’s still fresh and bubbly, but not so much that it’s hard to get at the actual beer. That’s the right amount of foam, according to my cultural assumptions. The question ‘with foam, or without?’ should never be asked; too much head means the bar staff are incompetent or the beer was shaken, and too little means the beer is old and flat. After coming to terms with the fact that things were done differently where we were, I asked for just a little bit of foam, hoping that that would produce the desired results. The waiter poured from a large bottle into a small glass, and it was drinkable.

This was followed by perhaps the worst papas fritas we ever ate in South America; about half an hour after bringing out a plate of crisps, and us explaining that we had ordered hot chips (both are apparently called papas fritas), a plate of soggy, cold, slimy pieces of something that may have been potato arrived.

Following this, we were paid a visit by a local who was on the way to fill his thermos from the hotel’s urn for mate. We had had a small conversation with him and his friends a while earlier when in the plaza (evidently rugby fans, they had asked us where we were from, and when we said “Australia”, said “All Blacks!” and seemed very pleased about it). He stood next to our table and talked at us in thick Argentinean for about half an hour. We only understood about 10% of what he was saying, but after a while, it appeared he may have been insulting us. He asked us if we were married. When we said no; he proceeded to talk about 11-year old whores with several children. We weren’t quite sure how to interpret this; but after a while we became uncomfortable and told him it was time for us to go.

We spent the rest of the afternoon relaxing in the plaza, talking to street dogs and reading books. The time passed slowly and we became quite bored. At exactly four pm a diesel engine started on the other side of the plaza, and the ears of the three or four dogs nearby perked up. A tinkly song started playing over a crackly loudspeaker: ‘How Much Is That Doggy In The Window”. A strange vehicle emerged on the other side of the plaza. It appeared to be a small truck or tractor that had been covered with metal sheeting to make it appear like a train locomotive. A clumsily painted Bart Simpson adorned the front. Immediately, every dog in the plaza – at least six of them- jumped up and started running towards the vehicle. It seemed they had been waiting all day for this. They were ecstatic. As the ‘train’ drove slowly around the square, evidently in order to attract children for a ride, the dogs chased it, barking excitedly. One of them evidently decided that it was the leader – it ran ahead of the train, looking back happily to make sure that it was still being followed. Of all the things I saw in South America, this was one of the funniest, and is the thing that I most regret not getting a photo of.

In a restaurant that night, we had further interesting interactions when ordering food. Georgia ordered wine, and asked for a ‘vaso de tinto’ (direct translation for glass of red wine). The waiter looked slightly confused, but came back bearing a tall tumbler of chilled red. After that we remembered to order a ‘copa’ when asking for wine, because in Spanish, wine glasses are called cups, not glasses.

Following this, we finally made it to the bus and headed north. La Rioja, Argentina: I can’t really recommend it.

Just a short note to let you know about an event happening this Saturday May 14 at Hole In The Wall Gallery. Alex Soares and I will be each presenting short talks about our photos and the places they were taken, starting at 1pm.

We’ll also be at the gallery for an hour or two either side of 1pm on Saturday afternoon in order to meet people and answer questions. The exhibition opening was a very hectic and busy evening, so we’re hoping to be able to have a more subdued event when we can stop and talk for a while.

The exhibition ends on Wednesday 18th, so this is a great last chance to come and see the photos if you haven’t already.

We had an awesome night on Thursday. At its peak, there must have been a hundred people inside the little gallery, which created quite a sauna. Alex and I received plenty of positive feedback about our photos and a few sales.

If you didn’t manage to make it down to the opening, the photos will be on the wall at Hole in the Wall until May 18th. The gallery is open weekdays 10-6 and Saturday 11-5. 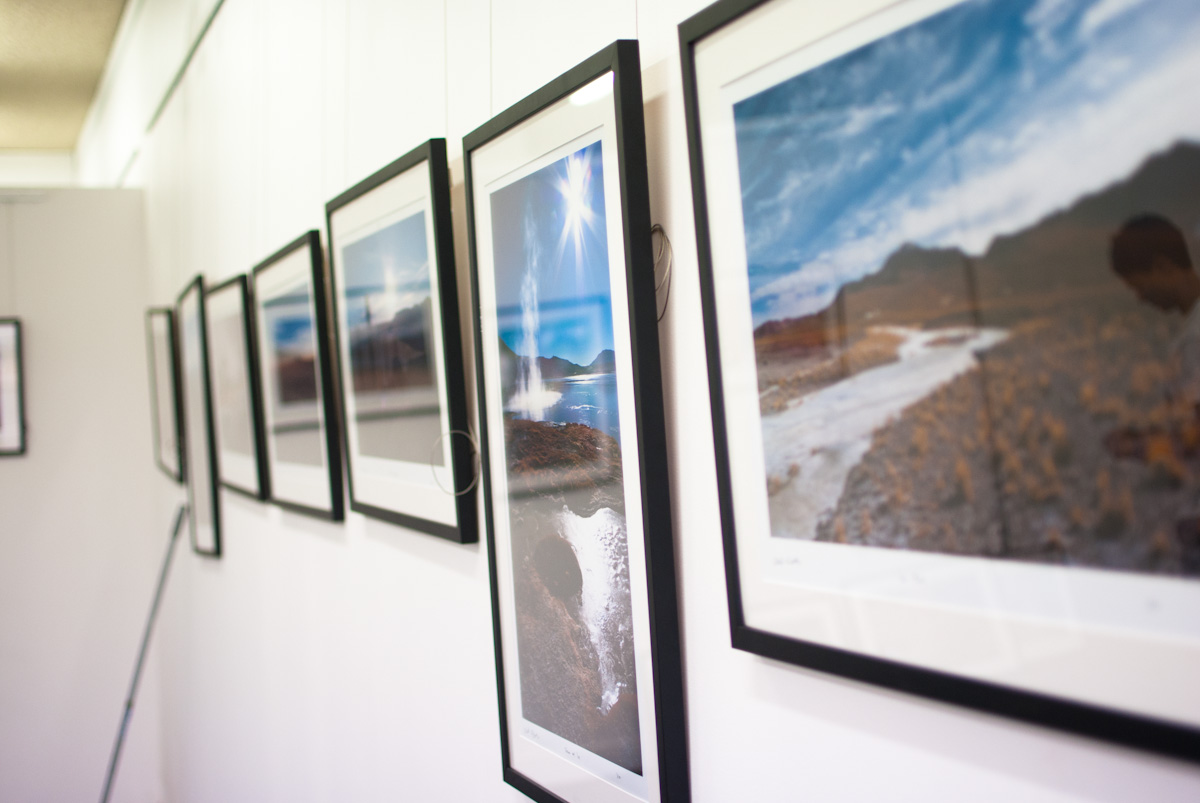 Dean hanging some of Alex’s photos 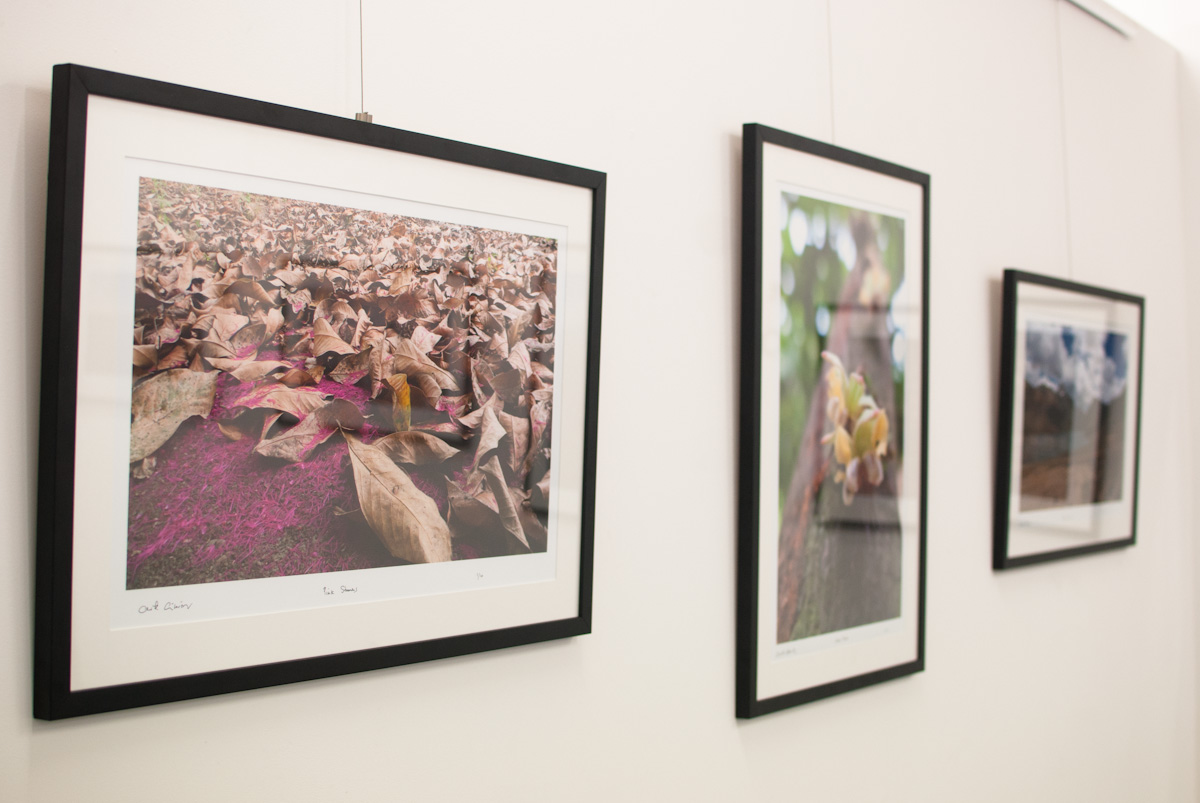 A few of mine on the wall 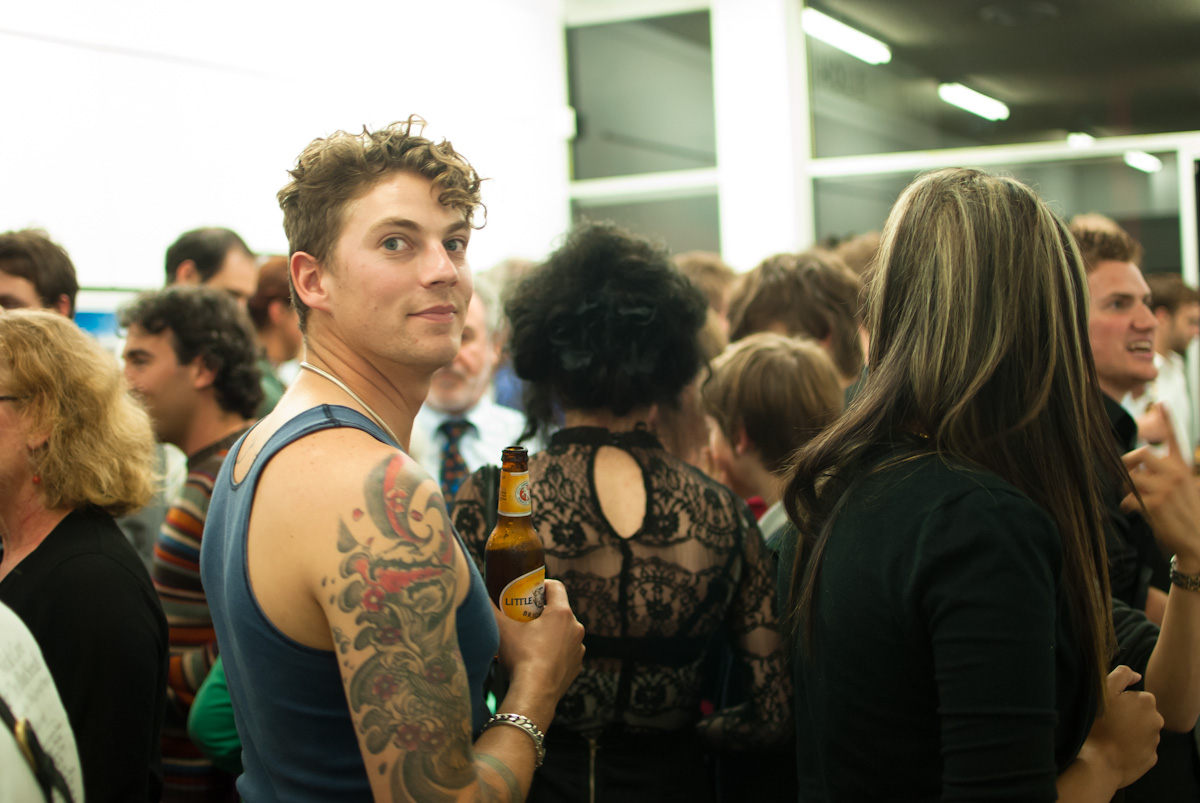 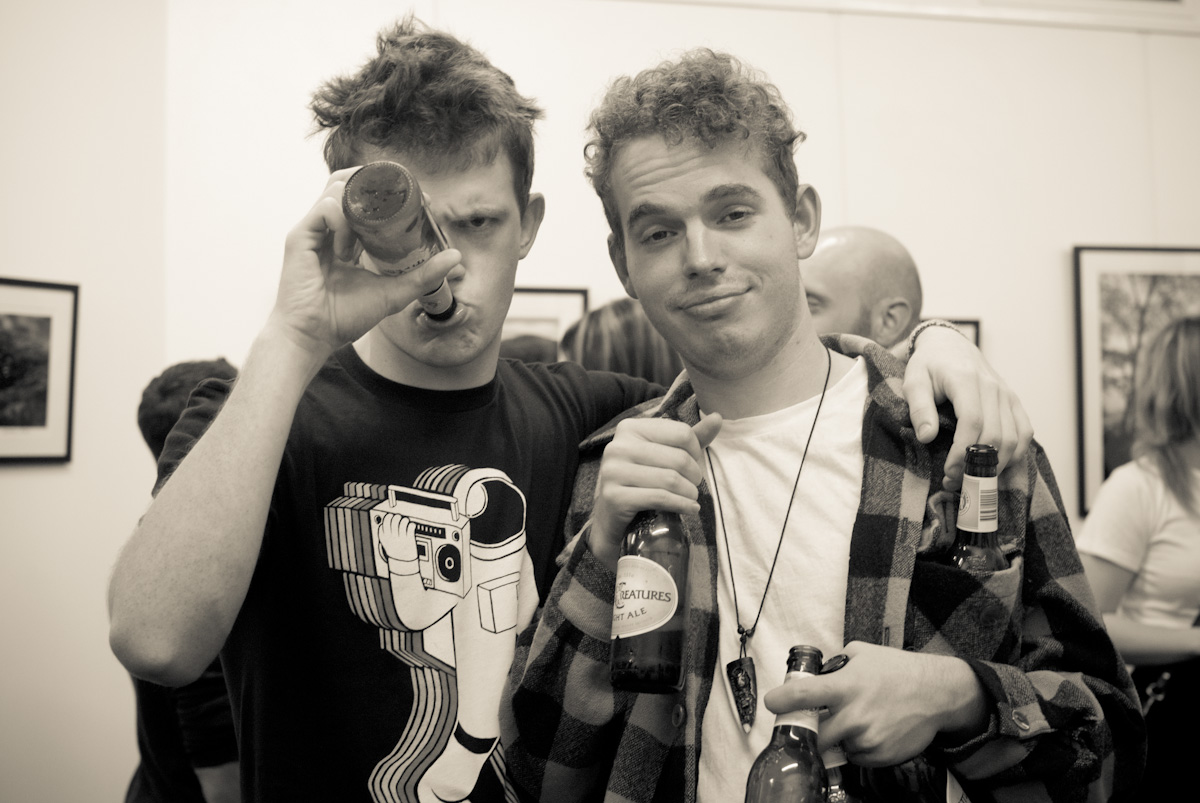 Quite a few beers were drunk 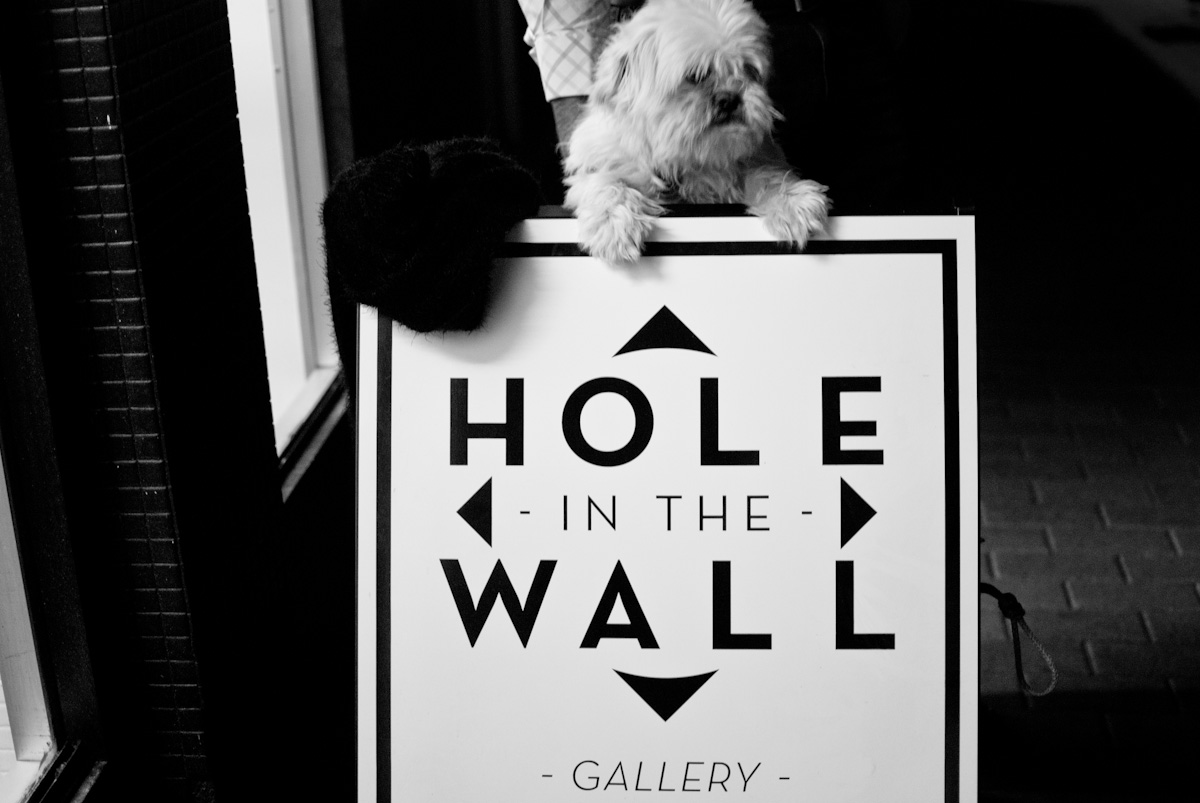 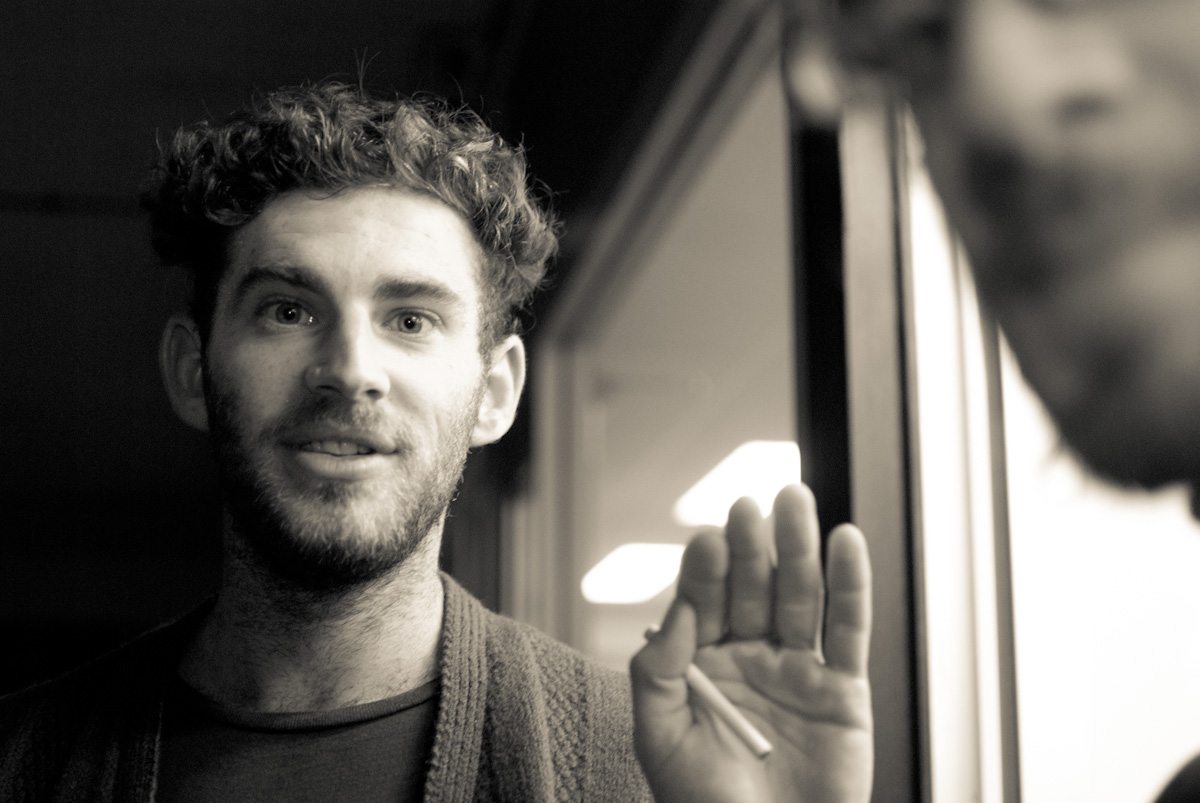 Simon Pynt (with my blurry face in the foreground)