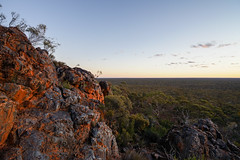 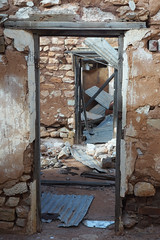 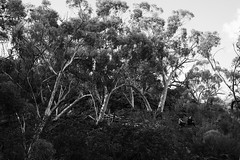 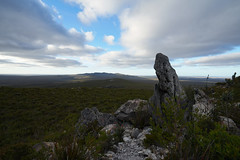 The first orchids of spring have started blooming in the south west. I’ve just spent the weekend out botanising with some adventurous friends to see what we could find near Margaret River. First stop was to see the Meelup Mallee (Eucalyptus phylacis), a 6600 year old clonal individual tree growing near Dunsborough. After walking around at the site for some time, we realised that we were actually walking amongst the stands of the tree, which consists of 26 ramets (separate but genetically identical ‘clones’). Many of these ramets are separated by tens of metres, and the other jarrah woodland species are abundant in between, so it is not easy to recognise that these stands are actually parts of the same organism. Considering that there is such distance between the stands, and they do not produce viable seed, the only way this individual could have spread across such a large area would be vegetatively, and hence it must be very old. The mallee is fascinating, but not particularly visually exciting, so I did a bit of orchid hunting in the area for photographic interest. I found a very pretty Caladenia reptans subsp. reptans.

Next stop was the habitat of a species called Caladenia caesarea subsp. maritima, which grows only in granite outcrops along the coast near Busselton. There are only six known populations of this species, and approximately 650 individuals. It is listed as Threatened (Declared Rare) Flora in Western Australia, and ranked as Endangered under the Commonwealth legislation (more info here, FloraBase page here). After some time spent poking around amongst the rocks (during which we found some Cyrtostylis huegelii growing under a small granite boulder), we finally found the Caladenia – although only two plants, one with a single flower, and one with two.

We were so excited about the orchid, and engrossed in taking photos of it, that we failed to notice several humpback whales playing in the bay only about 100m away from us. When we finally saw them, we ran down to the water and enjoyed watching the whales for an hour or so; unfortunately I was not able to get many good photos – every time a whale raised a fin I was unprepared and by the time I had focused, the whale had gone back to appearing as a dark patch of water in the photos. This is the best I could do:

After that excitement, it was time to get some supplies from Margaret River and set up camp at Contos. The following day we drove to Boranup forest to enjoy the views and climb some Karri trees. While we ran out of time for tree climbing, I did find some snail orchids (Pterostylis something, probably P. pyramidalis):

I also found this fungus, one of my favourite looking species, Coltricia oblectans

.
The weekend continued with some rock climbing at Wilyabrup – and all round was the most fun I have had in a short space of time for a long time.